I started my new job as a Research Associate/Fellow at Cleveland State University Monday. I had to fill out some standard paperwork the first morning over in HR. Turns out Ohio state employees don't pay into Social Security because of the pension system in place, so I had to sign a paper forfeiting my social security payments. The other papers were tax forms, ethics and fraud reporting, Viking card (employee card), direct deposit for payroll, personal data, etc. This took less than an hour and the folks were nice.

After that you need to get hooked up to the computer systems. So I called 5050 to get a temporary internet password and then logged into campusnet.csuohio.edu. Where the system asks you to set a backup email and a new password.

I then forwarded my email to my gmail account (they use Microsoft Outlook 365 internally...blah! You can access that at mail.csuohio.edu if you want to.)

At this point I can log into the wireless network and have library access and such. In Ubuntu I connected to the 4csuuseonly SSID and needed the following settings for the WPA2 Enterprise. The tech support folks in 1106 Rhoades Tower were very helpful with this even though the phone support lady had no idea what I should do on Linux. 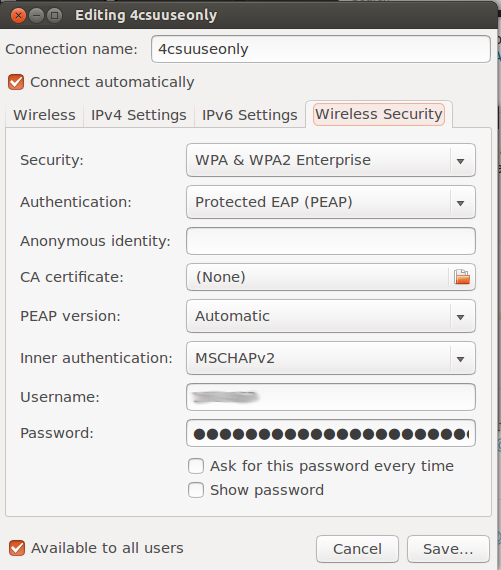 The library has access to lots of digital and physical media through OhioLink which is cool.

You dial 8 first on the campus phones to dial out and just dial the last 4 digits for campus numbers.

The phone.csuohio.edu directory is helpful for tracking down email addresses and phone numbers of folks on campus.

Only one negative so far. The Campus Rec center seems to be the only place on campus that has a shower. I'd love to have the option to freshen up after some of my more sweaty bicycle rides to campus (btw, the bicycle ride is pretty nice, I lucked up and get to ride on Cleveland's solitary bicycle lane for much of the way), but they want $26 a month to use the bathroom. Duh! Where are the incentives to ride you bike! The boss man at the rec center wasn't interested in any fee reductions. I guess it is better than the $70 monthly parking fee... but not that much better!