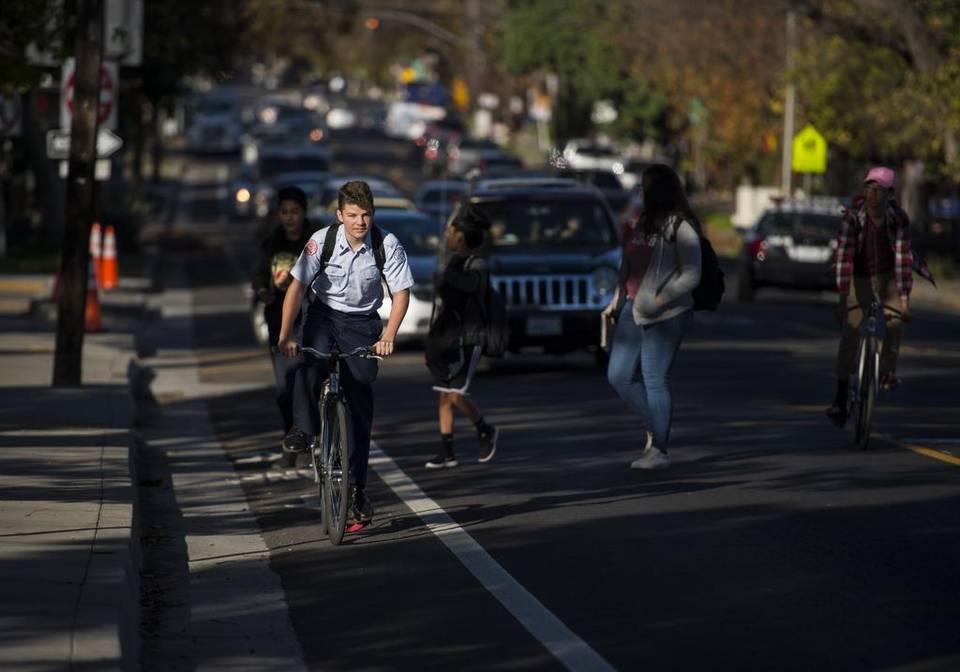 Photo from the Sacramento Bee article.

The Sacramento Bee published an article today showing off the city's work in making Freeport Boulevard safer for pedestrians and bicyclists. This makeover for the road was spurred by a locally viral video created by a McClatchy high school student years ago showing how dangerous it was for her to get to school by bicycle. Unfortunately, the primary photo they used for the article shows a scenario that does not look that safe by most bicyclist and pedestrian standards.

My buddy, Ted Beuhler, was in town so we decided to go check out Freeport with our tape measure in hand and see whether or not the $2.3M actually did make the road safer for bicyclists and pedestrians. We collected a number of photos with road lane width measurements along Freeport. The tape measure has alternating green and yellow blocks to indicate feet and the 10 foot blocks are designated in red. All of the photos are in a public photo album and have comments that explain the photos.

The key new features of Freeport are that some portions of the road had a road diet, i.e. four auto travel lanes changed into two auto travel lanes, one auto center turn lane, and bicycle lanes on each side. Secondly, the intersections of Sutterville & Freeport and 21st & Freeport now have portions of the bicycle lanes painted green to create a very visible space for bicyclists to traverse automobile merge lanes.

These changes are an improvement to what was there but I think that with a little bit of critical thought and creativity the road could have been made much safer for bicyclists and pedestrians at a number of locations with little to no change in cost. The following details some of our findings and opinions:

Gutter pans are not bicycle lanes

Sacramento has a fair amount of bicycle lanes compared to similar cities around the country, but the city seems to insist on forcing bicyclists to ride in the gutter. Most bicycle lanes in Sacramento are around a 5 foot width if you include the gutter. The problem with this is that a bicyclist has to ride either in the gutter or on the asphalt. The 1/4" to 1" lip between the two surfaces is enough to throw you off the bicycle, so it is impossible to use the full lane. You either have to have your elbow hanging in the auto lane or ride in the 1 to 2 foot wide gutter while dodging debris and drainage grates. 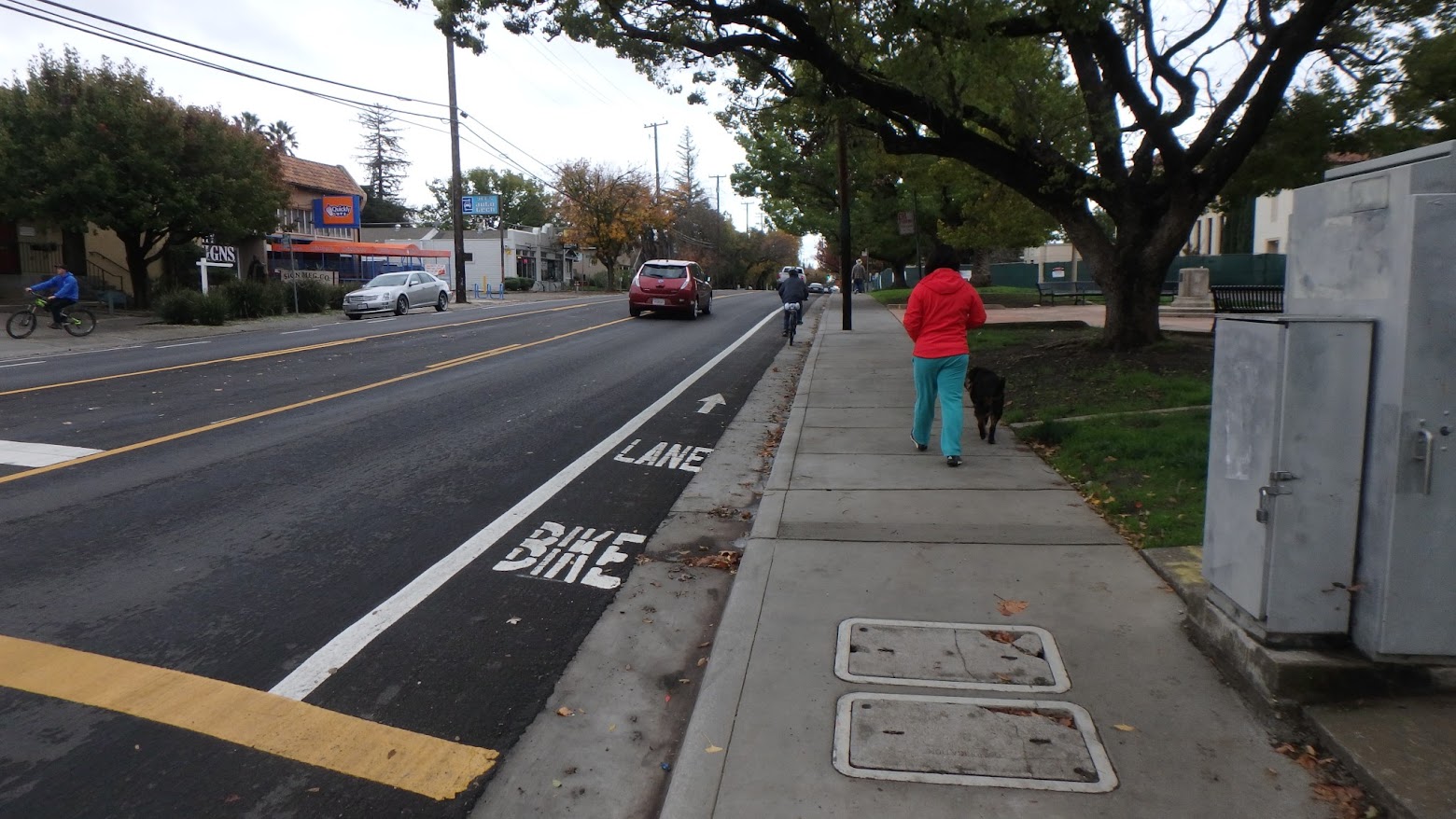 This photo taken right in front of McClatchy High School shows and elderly gentleman who decides to ride in the 2 foot wide gutter pan to be further from the cars. There is no option to ride in the middle of the 5 foot "bicycle lane".

All auto lanes should be 10 foot wide and no more

We measured auto lane widths on Freeport that ranged from 10.5 to 13 feet wide. The minimum auto lane width required by the MUTCD is 10 ft. Narrow auto lanes reduce automobile speeds and free up more space for bicycle lanes that are actually safe (particularly buffered lanes).

For example, where 21st intersects the light rail lines there are three auto lanes. The northbound lanes are 13 ft and 11 ft. The bicycle lane is about 2.5 feet of asphalt and just under two feet of gutter pan. Additionally, the southbound lane has a 3 to 4 foot section of unused lane now that the bicyclists are directed to follow the green markings into the pedestrian island. That is close to 8 feet of additional space that could be used to create a buffered bicycle lane on the northbound side. 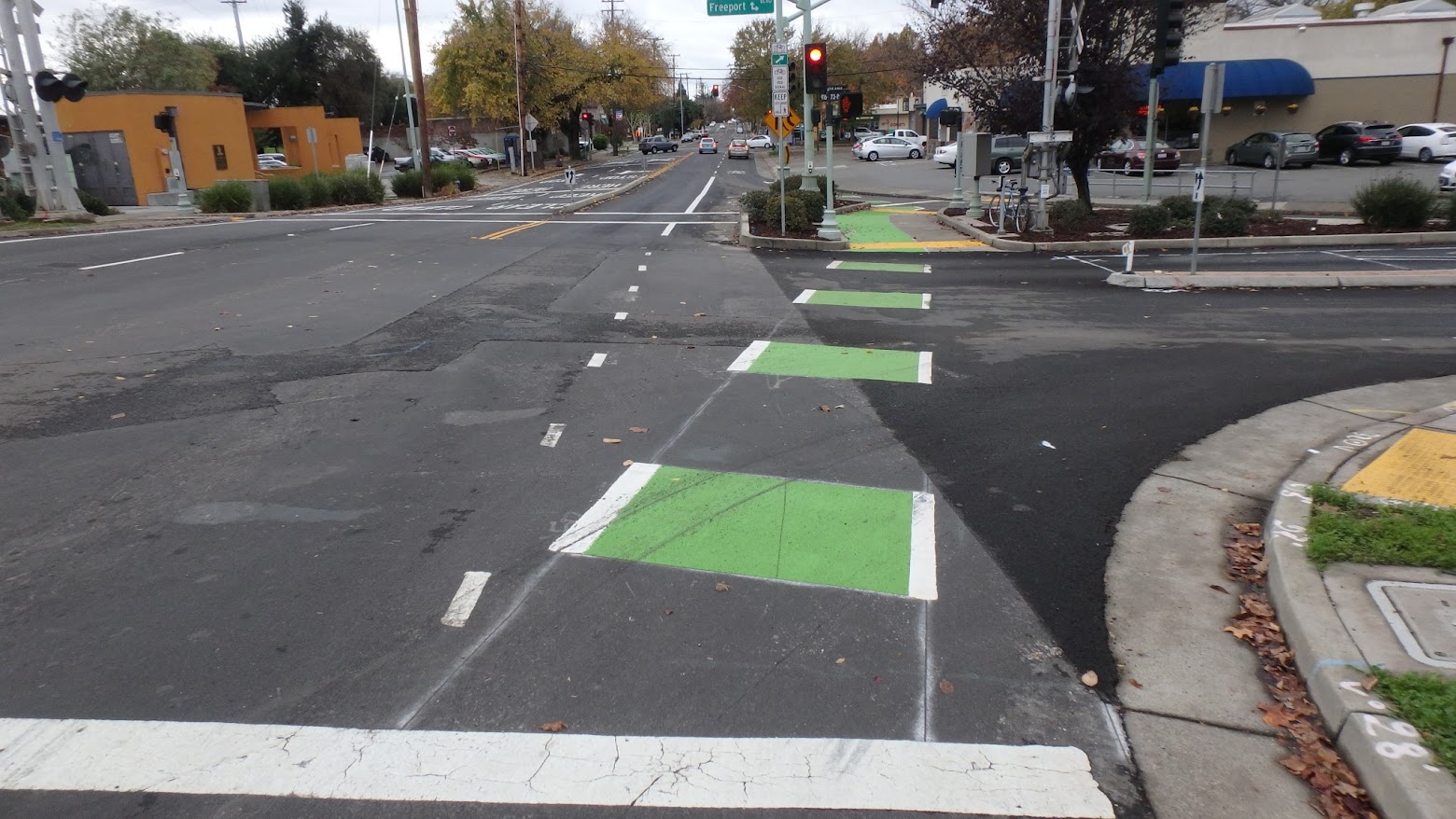 This photo shows the wasted space on the southbound lane, now that the bicyclists are directed to follow the green path. 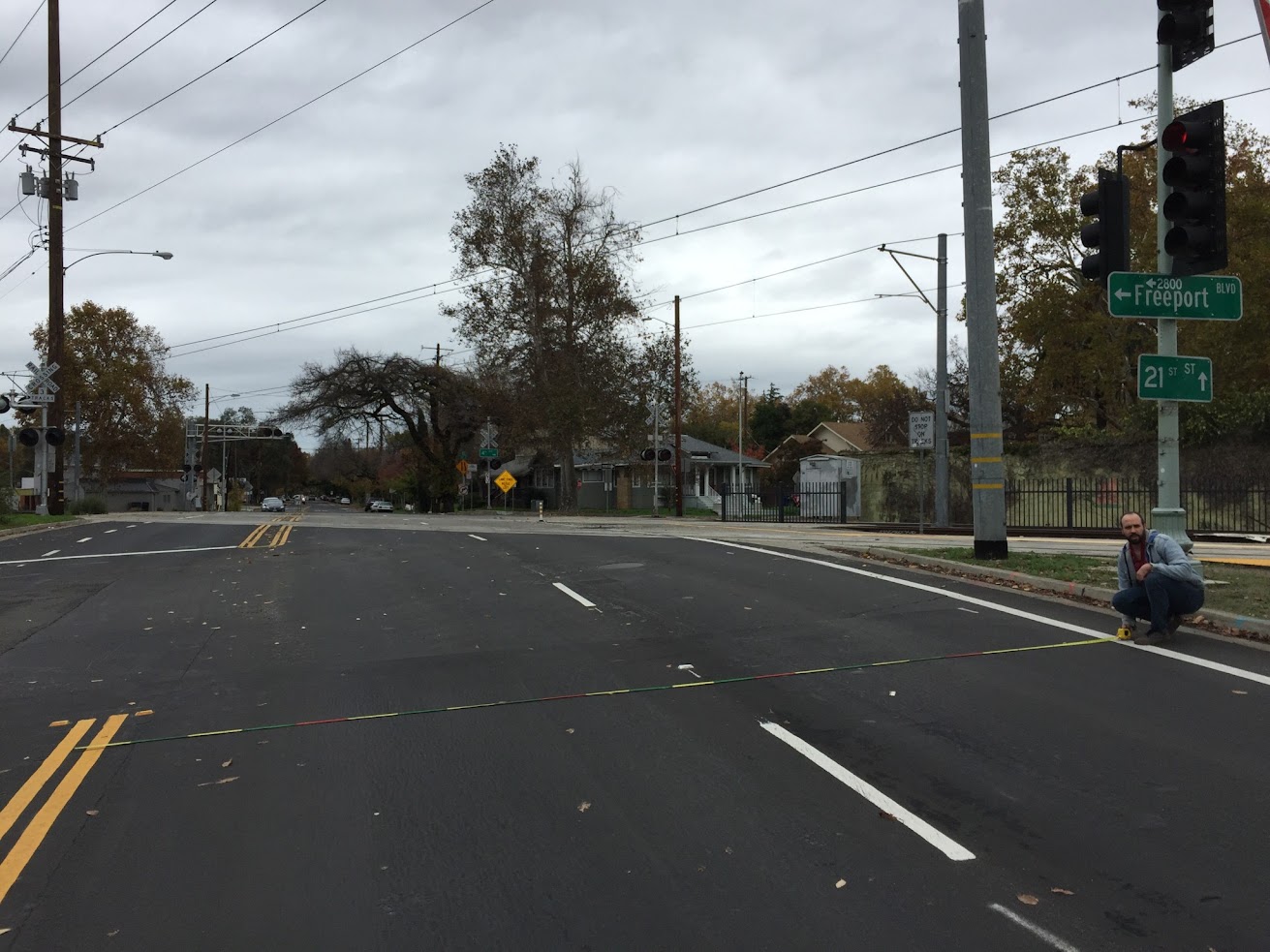 This photo shows the large 13 foot and 11 foot wide northbound automobile lanes and the tiny 2.5 foot bicycle lane (which gets even narrower as it approaches the train tracks).

Additionally, the southbound Freeport bicycle lanes are significantly less wide than the northbound side. Why make it less safe for southbound bicyclists?

If we want pedestrian and bicyclist friendly streets, we need narrow streets. Narrow streets have been shown to:

The $2.3M resurfacing and re-striping of Freeport should have ensured narrow automobile lanes, yet we've shown it didn't in most sections.

Our cities are designed around making the automobile transportation mode as convenient as possible. This is at the expense of walking and bicycling. The new design of the intersection of 21st and Freeport makes it less convenient for the bicyclists. They are now forced to ride onto the traffic island, press the pedestrian walk signal (which isn't within an arm's length of the green lane), and wait for the pedestrian cycle. This is likely safer for bicyclists as the merging Freeport traffic has to face them at a 90 degree angle at a stop light, but I doubt that bicyclists are going to do that, especially when there is a perceived more convenient route to the left of the pedestrian island. The real fix for that intersection would involve removing the ability for southbound Freeport traffic to merge at speed onto 21st.

The city did create a 6 ft wide green bicycle lane on the southbound side of Freeport just past the Sutterville intersection. This is a great move, but we need more of these! 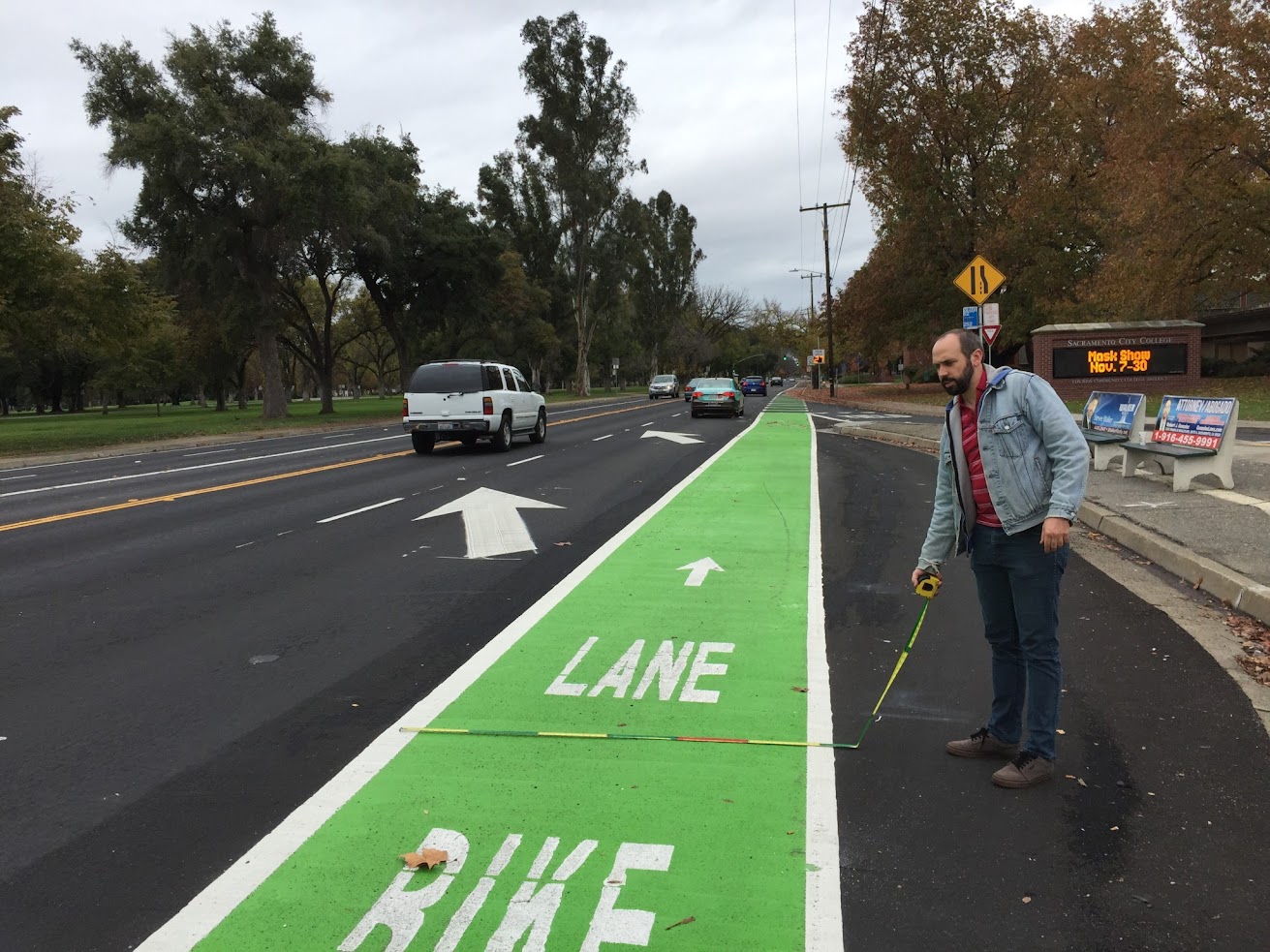 Note that this short span of green bicycle lane is 6 feet wide, which is pretty nice, especially since most cars are travelling at 40+ mph through this intersection and cars are merging at 25-30 mph across the green lane. This lanes still needs a buffer since auto speeds are so high (or we need to slow down the vehicles). This kind of lane width should be used on the entire length of Freeport on both north- and south-bound lanes.

Unfortunately, many city dwellers do not recognize that the bicycle lane is a travel lane just as much as the auto lanes are. This means that they often park in the lanes, put yard waste in the lanes (piles and/or bins), and turn into the lanes without looking for bicyclists. On this single Sunday morning ride we came across two vehicles parked in the southbound bicycle lanes: 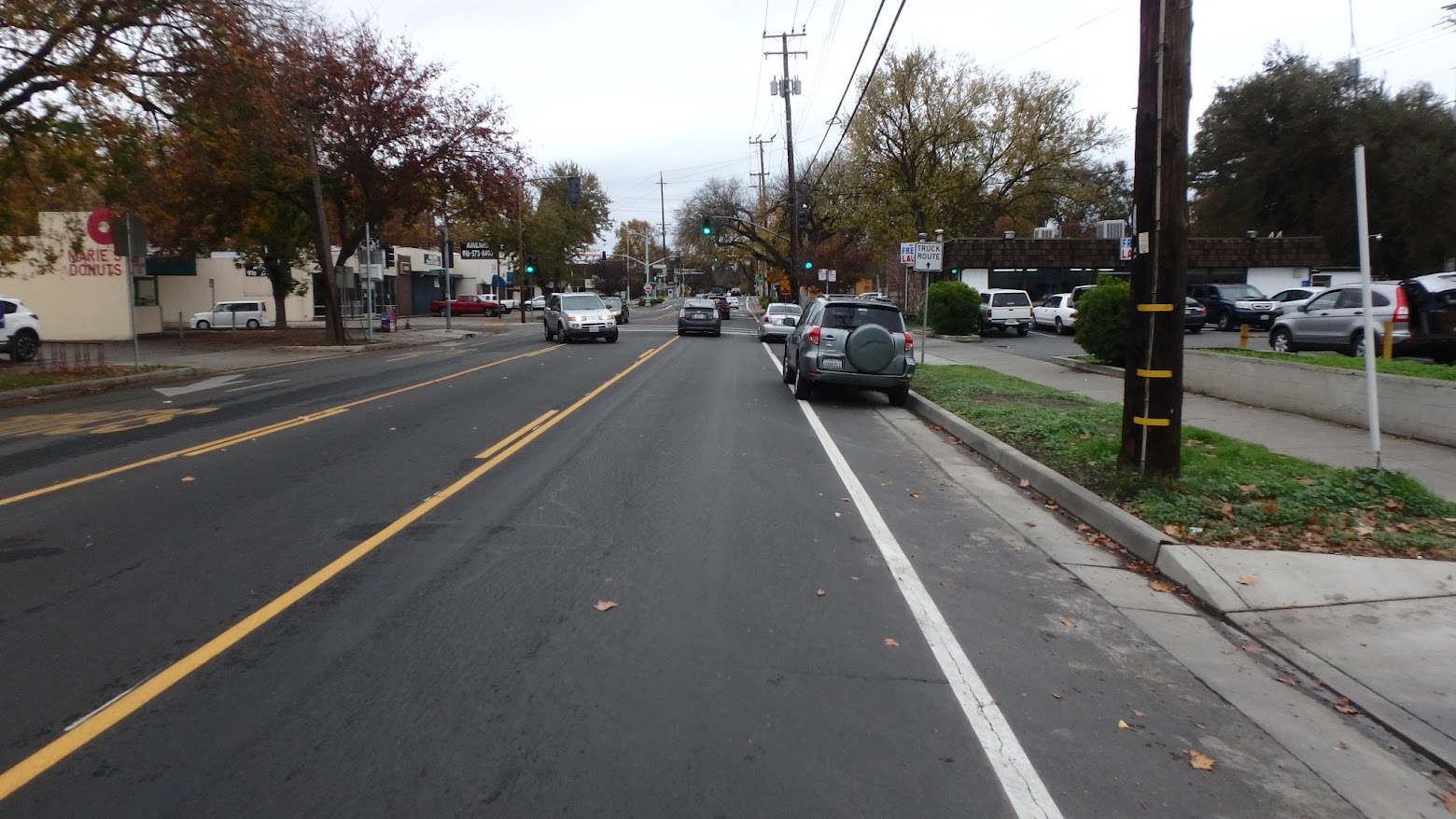 These folks are likley patrons of Dad's or Freeport bakery. They've blocked the bicycle lanes and forced the bicyclists into auto traffic with their illegal parking.

and yard waste blocking the lane: 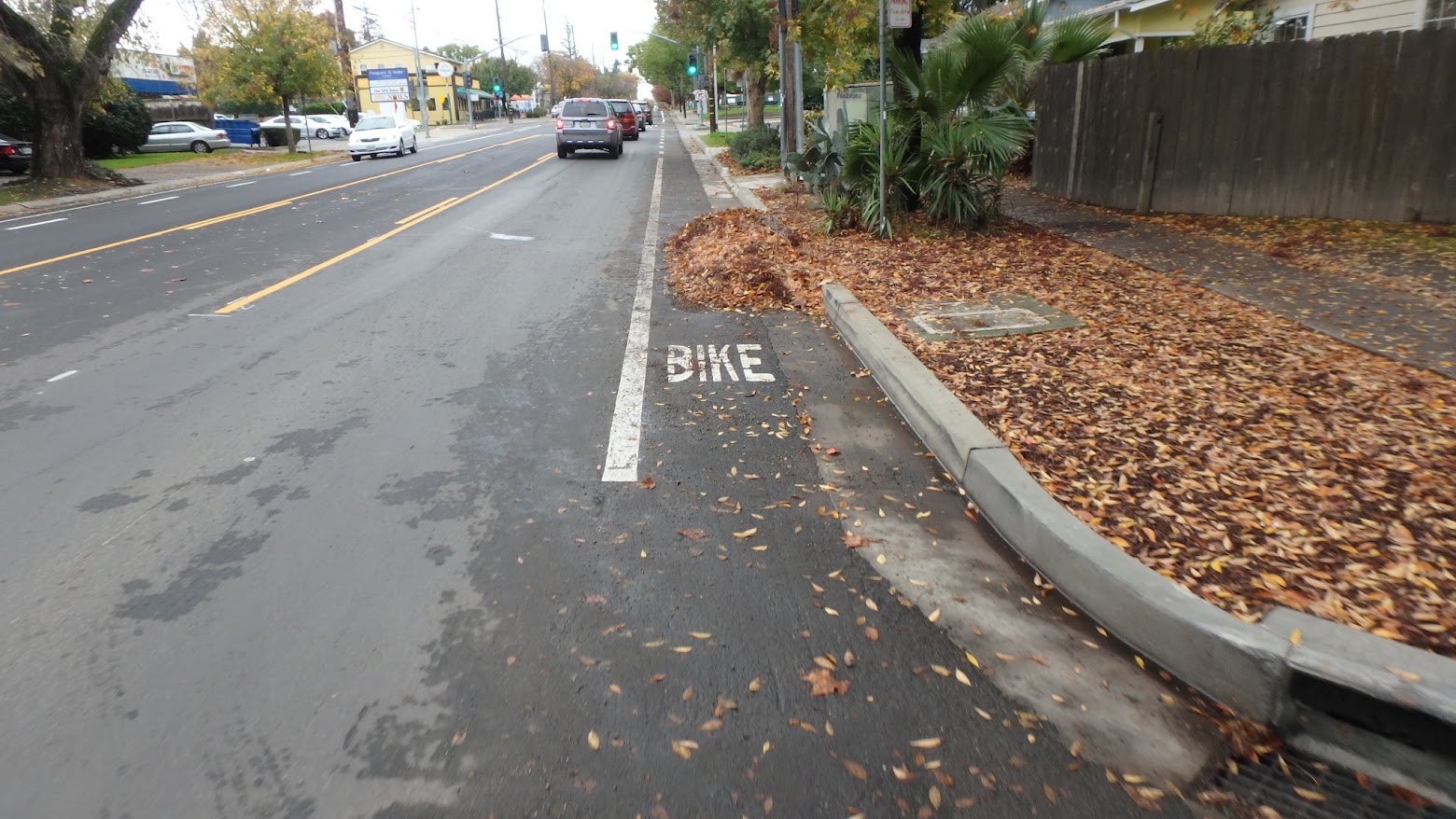 This photo shows how residents along Freeport pile leaves in the bicycle lane which forces bicyclists into the traffic lane.

It's great that Sacramento did something about Freeport Boulevard. It is certainly better than it was. But if we are going to spend $2.3M dollars to make it safe for pedestrians and bicyclists, why not make it as safe as you can with that amount of money? If the engineers and planners focused on the safety of bicyclists and pedestrians we'd have a very different Freeport Boulevard. Careful thought on lane striping goes a long ways and if we really want to be progressive we could implement some of the more modern infrastructure to make these travel modes safer. This will reduce traffic speeds significantly and help us create a walkable city. Just today, Long Beach has showed us up with beautiful buffered bicycle lanes. Sacramento could lead the state in bicycle and pedestrian safety, but we don't. We are in the position to heavily influence all of the state leaders that have to come here for government work. It's too bad that we aren't stepping up to the plate to do that.